Has anyone else read the CDC’s November 2015 Press Release: Reported Cases of STDs on the Rise in the U.S.? The findings may or may not be shocking to you, depending on how much you’ve researched the topic. Unfortunately what doesn’t surprise us, is how little this topic is covered by the media. Why is this not talked about in mainstream media and yet affects such huge swaths of the population? What about these sexually transmitted diseases are causing an increase in infections? What do these rates among ethnicities and age groups say about the U.S.’s medical access, sex culture, and socio-economics? First let’s just take a look at some of the rates the CDC is reporting.

Reported cases for three highly contracted sexually transmitted diseases, chlamydia, gonorrhea, and syphilis, have all increased for the first time since 2006. That’s nearly a decade of decline, all of a sudden reversed. Why?

Chlamydia is up 2.8% since 2013. Of those 1.4 million reported chlamydia cases, we’re seeing a rate of 456 cases per 100,000 people. Syphilis, both primary and secondary, also the most infectious stages of syphilis has increased by 15.1%! Alongside gonorrhea which has increased 5.1 percent since 2013.

According to the CDC

Per usual we continue to see STDs most prevalent among young adults and teens, specifically women. However the most startling development are increasing infection rates among gay and bi-sexual men which had a significant impact in the 2014 infection increases. 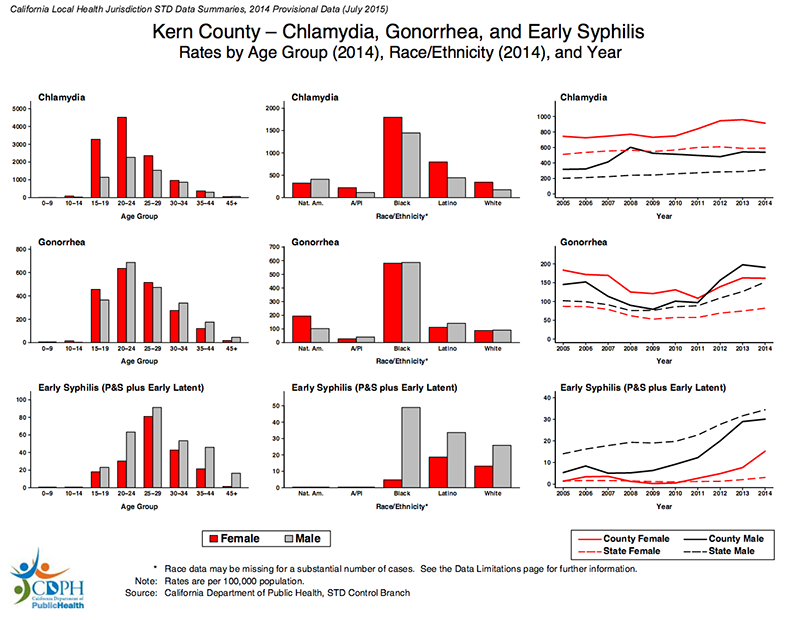 Perhaps the most stark pattern seen from these charts is the disproportionate infection rate among Black African Americans along with the rapid growth of gonorrhea and syphilis. Many health experts attribute this to a variety of potential causes. The first being the general symptomatic nature of gonorrhea and syphilis exhibiting little to no symptoms thereby increasing the rate of undiagnosed and unreported cases. Secondly the lack of education in how these diseases are spread; and thereby knowledge of preventative measures one can take may add some explanation.

Third is basic access to medical care, especially among the low income and uninsured. The U.S. is criticized heavily among progressives and other nation states for it’s highly inclusive privatized health care system. (It would be interesting to compare STD rates among nation’s with universal healthcare.) Fourth, one may attribute the increasing influence of single-life sex culture. As marriage becomes put off longer and longer, and even the very idea of a single parter for life shifts, the single sex culture becomes increasingly popular among younger generations.

All these factors may be contributing to the rise. These are all hypotheses, and require statistical studies to confirm. Yes some factors may be more powerful predictors that others. How can we expect poverty level individuals to afford access to an STD test when they are struggling to come up with rent? These rates are more than just individual infection rates, but a greater reflection at the health and education of our nation or lack there of. In 2016 with more access to information easier than ever, why are we seeing riskier sexual behavior?

Looking closer at the CDC’s STD Trends fact sheet, they note a disproportionate rate of STD infections among young people, more recently gay and bisexual men. According to the CDC “surveillance data shows both the numbers and rates of reported cases of chlamydia and gonorrhea continues to be highest among young people aged 15-24.”

They also note that women face the most consequences in terms of long-term health; estimating over 20,000 women become infertile each year due to undiagnosed STDs.

The CDC also notes the “troubling” rise in syphillis among gay and bisexual men. The CDC broadly attributes the disparities among demographics based on “individual risk behaviors”. Examples of individual risk behaviors are the number of lifetime sex partners, environmental, social and cultural factors. As we mentioned above, lack of access to healthcare, lack of education about the diseases’s transmission and treatment, and cultural stigmas of homophobia likely all can explain the increase.

Trend data show rates of syphilis are increasing at an alarming rate (15.1 percent in 2014). While rates have increased among both men and women, men account for more than 90 percent of all primary and secondary syphilis cases. Men who have sex with men (MSM)* account for 83 percent of male cases where the sex of the sex partner is known. Primary and secondary syphilis are the most infectious stages of the disease, and if not adequately treated, can lead to long-term infection which can cause visual impairment and stroke. Syphilis infection can also place a person at increased risk for acquiring or transmitting HIV infection. Available surveillance data indicate that an average of half of MSM who have syphilis are also infected with HIV.

Moral of the Story: Get Tested & Don’t be Afraid to Talk About It

It may seem like you alone can’t address the alarming disparities of STD infections among racial ethnicities, income levels, and sexual orientation. But in fact you can. And it’s as simple as having a discussion about it with your peers. Taking action and getting screened for STDs is vital for not only your own health, but to the entire human population. CDC recommends if you’re a sexually active women under 25 or have consistent new sex parters, annual chlamydia and gonorrhea tests are imperative.

If you’re a sexually active gay or bisexual male, request tests for syphilis, chlamydia, gonorrhea, and HIV at least once a year. A big component to reducing these infection rates begins first with discussion. Growing past the taboo or social awkwardness, and understanding that these ancient diseases aren’t going anywhere anytime soon. Rather we need to all have the courage to discuss these matters openly and address these issues. If youre in Fresno or Kern County, talk with your friends, read up on diseases and their methods of transmission and symptoms. Educate yourself and others, and you’ll be leading a healthy sex life. 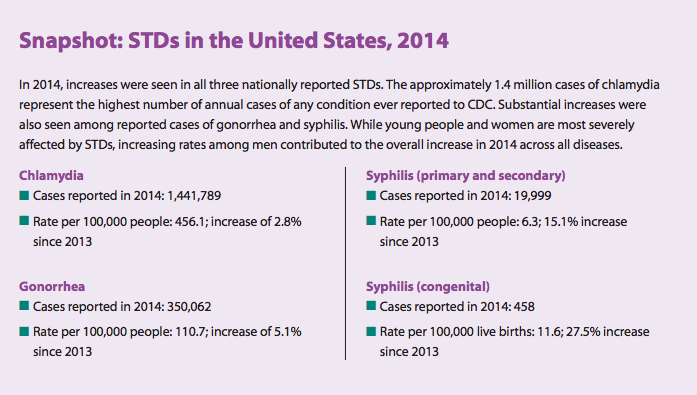 Thanks for taking the time to read! – Justin